Access : Enter through the east and leave by the west entrances 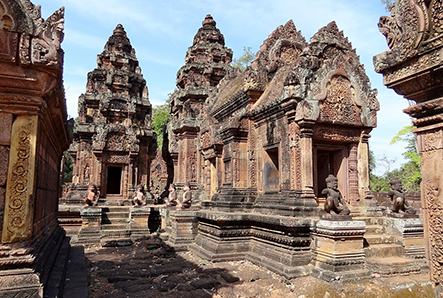 The enchanting temple of Banteay Srei is nearly everyone's favorite site. The special charm of this temple lies in its remarkable state of preservation, small size and excellence of decoration. The unanimous opinion amongst French archaeologists who worked at Angkor is that Banteay Srei is a 'precious gem' and a 'jewel' of Khmer Art. Banteay Srei, as it is known by locals, was originally called Isvarapura, according to inscriptions. It was built by Brahmin of royal descent who was spiritual teacher to Jayavarman V. Some describe it as being closer in architecture and decoration to Indian Models than any other temple at Angkor. A special feature of the exquisite decoration was the use of the hard pink sandstone (quartz arenite) which enabled the technique of sandalwood carving with even an Indian scent to it.

Architectural and decorative features of Banteay Srei are unique and exceptionally fine. A tapestry-like background of foliage covers the walls of the structures in the central group as if a deliberate attempt had been made to leave no space undecorated. The architecture is distinguished by triple superimposed frontons with relief narrative scents carved in the tympanums, terminal motifs on the frams of the arches, and standing figures in the niches. Panels are decorated with scents inspired by Indian epics, especially the Ramayana and its execution has liveliness not seen in the more formal decoration of earlier temples.

The temple discovered by the French in 1914, but the was not cleared until 1924. The theft of several important pieces of sculptures and lintels by European expedition, meticuously planned by the young Frenchman, Malraux, caused a great public scandal in 1923, but hastened the archaeological work. The thieves were held under house arrest in Phnom Penh and only released after the return of the stolen pieces.

Banteay Srei is the first temple at Angkor to have been completely restored by the process of anastylosis, after the EFEO studied this method at borobudur on the island of Java in Indonesia.  Compared to the rest of Angkor this temple is in miniature. The doors of the central towers are narrow and barely one and a half meters (five feets) in hight. The quality of architecture and decoration make up for any shortcoming in size. As M Glaize wrote, Banteay Srei is a sort of caprice where the detail, of an abundance and incomparable prettiness, sweeps away the mass. The inscription relating to the foundation of Banteay Srei was discovered in 1936 and the easternmost Gopura of the outer enclosure wall.